The quintessential Battle Royale. Hydrox, the Original and First Creme Filled Cookie vs. the Big Bad Numero Uno, Alpha Male Creme Filled Cookie, OREO. Did you know that HYDROX was first out of the gate, not to mention the box, when it was first created in 1908 ! In fact, HYDROX is currently celebrating its 100th Anniversary this year. The makers of Oreo, on the other hand, so admired the Hydrox creme filled cookie that they copied it and named it OREO thereafter. This 100th Anniversary of HYDROX is being promoted online at: 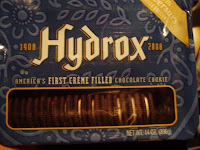 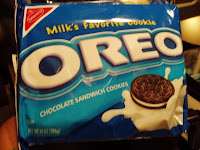 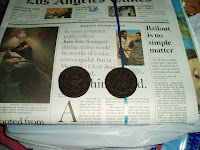 The lesson of Hydrox and Oreo in terms of marketing strength, however, is a clear victory for OREO. Only the faithful loyalists of Hydrox principally are aware that Oreo was second or even care, for that matter.

In terms of trademark law, there is clearly no likelihood of confusion between the brand names and trademarks associated with each of these creme filled cookies, e.g., HYDROX and OREO, even though they may look identical. One wonders what, if any, design trademark and/or patent protection may have been obtainable initially by the makers of Hydrox, even if only to slow down the competition from catching up and as we all know now, surpassing and very much burying Hydrox in the hearts and minds of the American Public.

You can be certain that both cookie companies have registered their brand names as trademarks with the USPTO, however. In the case of HYDROX, there is currently a U.S. Federal Trademark Registration in place for cookies that has been renewed since it first became registered on Jan. 20, 1959, Reg. No. 0672920, in Class #30 for cookies. An earlier registration for Hydrox also appears in the USPTO TESS database as 'expired' but had been originally filed for and registered at the time of the first sale of Hydrox. This earlier registration is interesting because it corroborates the claim of Hydrox as the first creme filled cookie. In this regard, the first HYDROX trademark was Registered on April 15, 1913, Reg. No. 0091099. The underlying application was filed on May 6, 1912, with claimed first use in commerce as of Jan. 1, 1910. This earlier registration in Class #30 included "[ BISCUITS, CAKES, AND ] COOKIES".

Research on the commercial success and fate of HYDROX is also interesting because there is reference to a discontinuation of the HYDROX cookies in 1999. Thus, from a trademark perspective, one has to wonder if there was an abandonment of this mark by its owner. This is an open question and has yet to be litigated with respect to this particular trademark. Nevertheless, the Trademark Act states that three years of non-use is presumptive abandonment. On the other hand, as of as recently as Sept. 3, 2008, the owner of the 1959 HYDROX registration above renewed said trademark once again.

Here is just a sample of the research material available online:

The maker of OREO have likewise registered OREO multiple times, principally in connection with the chocolate portion of their archetype cookie and derivations thereof. Among the registrations for OREO are the following: Reg. No. 0093009, Reg. Date: Aug. 12, 1913, in Class #30 for a "biscuit", with First Use claimed since March 6, 1912; and others for brownies, pie crusts, ice cream cones, chocolate cookie crumbs, etc.

On the 100th Anniversary of HYDROX, cookie enthusiasts are applauding the relaunch of HYDROX. As a cookie aficionado myself, I welcome this cookie back to the store shelves, but as a trademark lawyer I wonder if the 1959 registration is at risk because of the potential lapse of use issue between 1999 and 2008. Something to think about over a glass of milk and Hydrox cookies perhaps for the trademark lawyer, but I expect otherwise a non-issue for the vast majority of the American Cookie Public.
Posted by William Maguire at 3:51 PM No comments: