It's looking kinda scary outside our new office...


Posted by William Maguire at 12:54 PM No comments:

Please be advised that effective Nov. 1, 2012,  we will be moving into another full service executive suite.  I am very excited about this move to Santa Monica (aka, Silicon Beach) to Broadway Plaza at the corner of 6th St. and Broadway (as pictured above), which will enhance our ability to provide legal services to our clientele.

The new address, contact info, etc., are as follows:

Note: Phone and Fax will be the same.

Posted by William Maguire at 3:11 PM No comments:

Carabiner: The word and the trademark...

This all started when I was talking to a colleague on the phone earlier today and suggested that he get a carabiner.  He said, what's that.  I told him it was one of those metal clips that you see attached to back packs and day packs to hang stuff from. He then said I should discuss the carabiner in my next blog post. So here goes...

Carabiner: The word and the trademark.

First of all, the use of a word arbitrarily is basically open season, as it were, subject to conflicts, etc. et al.   Thus, "Carabiner" can be used and registered as a trademark so long as it is not being used merely descriptively (generally speaking).

With that said, here is what Wikipedia has to say:

A carabiner (/kærəˈbiːnər/) or karabiner is a metal loop with a sprung gate[1] used to quickly and reversibly connect components in safety-critical systems. The word is a shortened form of "Karabinerhaken", German for "spring hook for a carbine".[2]"

In terms of trademarks that are either pending or registered in the U.S., here are two case studies:

comment:  I think I would have refused this application as being merely descriptive of the goods since Carabiner is generic for metal fasteners.  Interestingly, however, the USPTO recently approved this application for publication...  I don't think the disclaimer helps. What do you think ?  KING seems like a superlative term without much strength and the mark is filed in standard character format.

comment:  The Examining Attorney required a 'disclaimer' and this appears to be because the lighter at issue is shaped like a carabiner (see specimen below).  The Office Action of record required the included a dictionary definition, as follows:

car·a·bi·ner also kar·a·bi·ner (kàr´e-bê¹ner)  noun
An oblong metal ring with a spring clip, used in mountaineering to attach a running rope to a piton or similar device.[1]

fn:  [1]The American Heritage® Dictionary of the English Language, Third Edition copyright © 1992 by Houghton Mifflin Company. Electronic version licensed from INSO Corporation; further reproduction and distribution restricted in accordance with the Copyright Law of the United States. All rights reserved.

Except for its shape, which most likely accounts for the disclaimer requirement, this use of Carabiner seems arbitrary.  On the other hand, it seems like "Torch" should have been disclaimed as well.  In any case, I like this mark and I want one of these lighters (see specimen below) ! 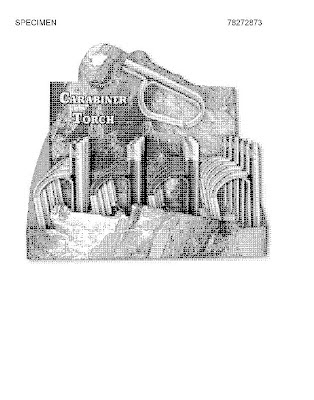 So there you have it!  Carry one of these torches and you can have your carabiner and light it too...

Posted by William Maguire at 1:20 PM No comments: