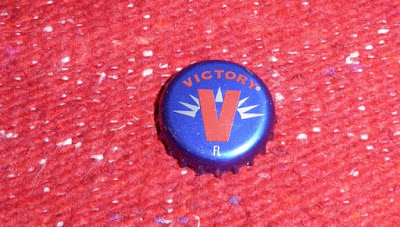 Found this bottle cap on the beach along the Pacific Ocean at Topanga Cove (x-ref: Topanga Canyon) near Malibu, California, this past Friday... on another very warm and humid day thanks to Tropical Storm Linda which brought both the heat and some surf...

The distribution chain must be pretty darn good if a beer from Pennsylvania can make it across the country to be uncapped on the sand just a few feet from the shoreline...

•  USPTO “TESS” Record (partial excerpt; one of numerous registrations owned by this Registrant):

And for pop culture fans of the hit cable tv series (and more recently a 2014 feature film), Entourage, can't you just hear Johnny Drama scream, "Victory!"...  as he did in Season 8?...

Who knows... maybe it was Johnny Drama hoisting a bottle of this brew at the beach at Topanga Cove...  either that or the guy driving the truck who just finished his deliveries...