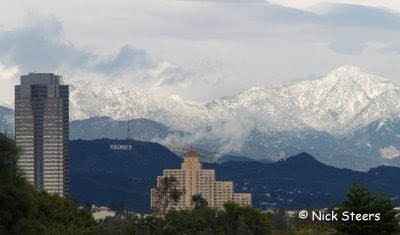 (Photo by and Copyright Nick Steers 2009. All Rights Reserved. Used here with permission. Reproduction without consent is strictly prohibited).

Wow ! Not much you can say about this photo ! After four days of winter storms, with snow levels approaching 2,000 feet, this was the view from the westside yesterday afternoon, 02.09.09.

Many thanks to Photographer, Nick Steers, for sharing this amazing photograph with us !

Enjoy !
Posted by William Maguire at 11:24 AM No comments: 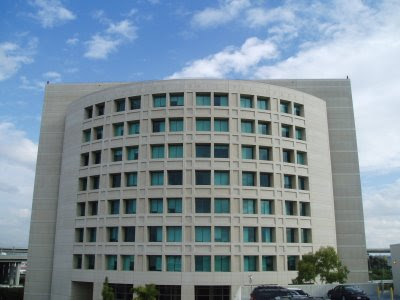 (Photo of the new LAX Adjacent Superior Court of California, in El Segundo, Calif. Photo by Will Maguire. Used here with permission.)

The undersigned was recently called for jury service and so we thought we would write up a little bit about this civic service experience.

Dec. 25, 2008. Merry Christmas morning. I collect my mail and there it is, that envelope I've seen several times before in years past from the Superior Court of Calif, Office of the Jury Commissioner. Inside, the invitation to appear for Jury Service beginning Monday, February 2, 2009 through Thursday, Feb. 5, 2009.

January 31st and Feb. 1, 2009. The first two days I call in the nite before as instructed and am told not to appear.

Feb. 3, 2009. I call the 800 number after 6 pm as I have done the previous two evenings and lo and behold I hear a different message that tells me to be at the Courthouse the following morning at 8 a.m. !

Feb. 4, 2009. I spend the entire day at the courthouse. Attendance is confirmed. A video is screened. A lecture and introduction is given. The first of two groups are called for for jury service and sent off to courtrooms. Around 11:15 a.m, I am called to a courtroom for what we learn to be an anticipated 10 day trial minimum. Fortunately, there are enough potential jurors who stand up as being able to participate for several weeks, so that the two dozen of us who stayed seated because of problems with serving for that long of a period are as a group summarily released by the judge and told to return to 4th floor jury room for possible further selection. Then comes lunch from 12 noon to 1:30 pm. Upon my return from lunch, my number is called and I am instructed to proceed to a trial on the 7th floor where I am selected for a 2 - 3 day trial. The rest of the afternoon the Judge and counsel attempt to select a jury. We are dismissed around 4:30 pm for the day and told to return to the courtroom at 10:30 am the next day. 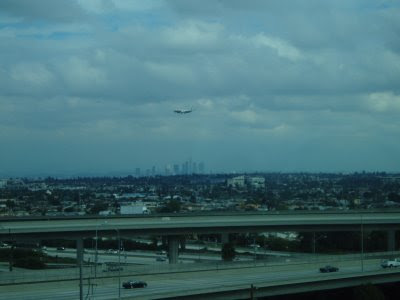 (View from the 7th Floor of the Courthouse, looking east toward Downtown L.A. Note: The American Airlines jet on approach to LAX. Photo by Will Maguire. Used here with permission).

Feb. 5, 2009, 10:30 a.m. Back on the Seventh Floor, Courtroom A. Our jury is again seated and voir dire (questions by the Judge and Counsel) continues. The final jury has not yet been selected but just shy of 12 noon we do finally get there and then come the "peremptory challenges" allowed for both the prosecution and the defense (see below). As luck or fate would have it, the defense selected me for peremptory challenge and I was free to depart after checking in with the 4th Floor Jury Room staff and was thus finished with my jury service.

"From Wikipedia, the free encyclopedia

Peremptory challenge usually refers to a right in jury selection for the defense and prosecution to reject a certain number of potential jurors who appear to have an unfavorable bias without having to give any reason. Other potential jurors may be challenged for cause, i.e. by giving a reason why they might be unable to reach a fair verdict.

The idea behind peremptory challenges is that if both parties have contributed in the configuration of the jury, they will find its verdict more acceptable. The existence of peremptory challenges are an important safeguard in the judicial process as it allows both the defendant and the prosecution to get rid of potentially biased jurors. Their use allows attorneys to use their training and experience to dismiss jurors who might say the correct thing, but might otherwise harbor prejudices that could infringe the rights of the defendant to a fair trial.

The use of peremptory challenges is controversial as some feel it has been used to undermine the balanced representation on a jury which would occur using random selection. Despite this, it still remains in use in several jurisdictions and in some cases leads to extensive and expensive jury research, aimed at producing a favorable jury."

Comment: I do not know for sure why I was challenged and removed from the jury being impaneled but I was relieved since I anticipate that this trial will run into tuesday including deliberations, which would be an imposition upon my clients and potentially harm my zealous representation of my client matters.

Civic duty concluded, I turned in my juror badge and was given a juror receipt for having completed my jury service...... and away I drove into the rain just starting to beat down on the mean streets of Los Angeles...
Posted by William Maguire at 4:46 PM No comments: