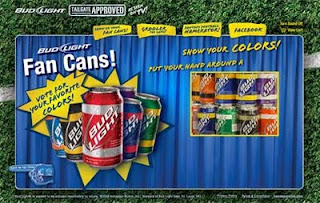 How do you make Budweiser ? Send him to school. Can you blame him if his son, Bud Light, wants to wear the school colors..... 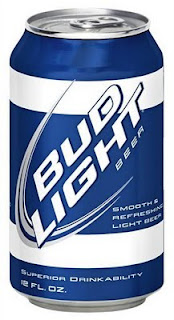 But seriously, unless you've been out cold for the past week because you've been overindulging on 'blue and gold' Bud Light beer, then you have heard the latest ruckus between Anheuser-Busch (aka, A-B) and this time, college administrators across the country who are all stirred up, shaken and bothered by the latest Budweiser Marketing campaign which will be serving up cans of beer in your favorite college team's colors... just in time for this Fall's tailgate parties at Football games. Woo Hoo ! Who wouldn't want to crush the can of your opponent !

In any event, the following are just a few of the news publications, on and off line, blogs and other pundits who have chimed in on this controversial topic. Will this lead to greater underage drinking ? Is this simply an aggressive marketing campaign ? Or is it an act of unfair competition as proscribed by the Federal Lanham Act's Sec. 43(a) with respect to Anheuser-Busch creating a false impression of sponsorship or affiliation with the college's by using their school colors. Isn't this something that A-B should be paying a license for instead of riding on the coattails of each college's good will and fame. At press time for this blog, it should be noted that each College has been invited or instructed by Anheuser-Busch that they can object and stop the use of their school's colors just by sending in a formal letter to the brewer. This writer is unsure that this relieves the brewer of liability but it is certainly evidence of mitigation.

So, without further adieu, let's hop to the pundits:

4. Anheuser-Busch pulls promotions at some colleges

A controversial Anheuser-Busch InBev NV marketing campaign that appears squarely aimed at young drinkers has the University of Wisconsin and others seeing red.

6. Show your true colors with Bud Light? Is it green? 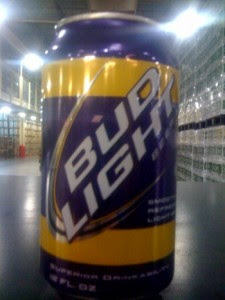 August 21st, 2009
From the Wall Street Journal comes news that there are now Bud Light cans in your favorite team’s colors. Kick. Ass.

That concludes this compilation of comments on the Bud Light College Colors Marketing Campaign currently in progress for the Fall College Football season for which it was intended. As one pundit has observed, is this really just another example of aggressive, albeit corporate, "Ambusch" marketing ?!....

Time will tell, of course. In any event, the publicity associated with this campaign will likely endear college students to Bud Light and increase sales. This writer predicts an uptick in Bud Light sales this fall as a result thereof.

*** Be sure to check out website as well at: www.TrademarkEsq.com.

Thanks !
Posted by William Maguire at 3:08 PM No comments:

A. Brands and Logos

Check out this article posted online courtesy of Yahoo ! Finance and CNN Money:

The above article is a good place to start when thinking about adopting a logo or changing the logo you're already using. It cites examples of very well known corporate brands or logos such as Starbucks, Apple, UPS and others.

1. What Is a Trademark or Servicemark ?

A trademark is a word, name, symbol or device which is used in trade with goods to indicate the source of the goods and to distinguish them from the goods of others. A servicemark is the same as a trademark except that it identifies and distinguishes the source of a service rather than a product. The terms "trademark" and "mark" are commonly used to refer to both trademarks and servicemarks.

Trademark rights may be used to prevent others from using a confusingly similar mark, but not to prevent others from making the same goods or from selling the same goods or services under a clearly different mark. Trademarks which are used in interstate or foreign commerce may be registered with the Patent and Trademark Office...
(Source: http://www.uspto.gov/web/offices/pac/doc/general/whatis.htm )

2. The Relationship between Brands/Logos and Trademarks

It is the legal device, as defined above, and known as a trademark that protects the brand. The brand is the commercially intangible yet recognizable source for the goods and/or services that are of interest to the consumer making the purchasing decision. The trademark, on the other hand, is like the shrink wrapping or the umbrella or deflector shield that protects the brand from being used by third parties for the purpose of unfairly competing with the owner of the brand and trademark.

In other words, in a competitive commercial business environment that is a staple of a capitalist society, it is imperative that brands be protected by trademarks.

If you are interested in protecting your brand, logos with a trademark, please contact the undersigned. We also welcome you to visit our website where we have several articles posted that may be of interest to you concerning the selection, clearance and registration of trademarks.

Note: The logos or brands highlighted in this blog post are the property of their respective owners and have only been used here as examples of brands or logos. The undersigned does not claim any rights of ownership to said brands or logos.