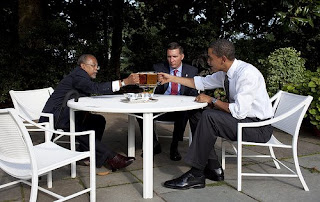 By now everyone not holed up in a cave in Afghanistan has heard about the Obama Beer Fest. What you have not read, however, is the Trademark Perspective of this Lager Drenched Event ! This blog post shall then devote itself, after a few preliminary remarks and introductory photo and links, to the specific beer brands and their trademarks that were featured at this Summit of Beers. After all, here at TrademarkEsq, it is the Trademarks which protect these now even more famous brands from being hijacked by pirates, counterfeiters and infringers.


A. Preliminary Remarks About The Summit Itself

One Popular Media Blogger has even characterized Obama's role in this mediation as more "Bartender-in-Chief". "OBAMA MORE BARTENDER THAN MEDIATOR AT BEER SUMMIT: President Barack Obama played bartender-in-chief on Thursday at a “beer summit” of the main players in a racially charged case that he hoped would be a “positive lesson” in a national dialogue on race. Obama, the first black U.S. president, said it was a “friendly, thoughtful” conversation over beer at the White House with prominent Harvard scholar Henry Louis Gates, who is black, and police Sergeant James Crowley, who is white." (Source: http://www.lbnelert.com)

Perhaps the most salient and important comment to emerge from this dialogue is as follows:

"We agreed to move forward," Crowley said later when asked whether anything had been solved. "I think what you had today was two gentlemen agreeing to disagree on a particular issue. I don't think that we spent too much time dwelling on the past. We spent a lot of time discussing the future." (By PHILIP ELLIOTT, Associated Press Writer Philip Elliott, Associated Press Writer – Fri Jul 31, 8:10 am ET).

B. The Trademark Perspective in the USA

Note: In addition, there are at least two other design marks that are registered by this same Owner in connection with the BLUE MOON brand, as follows:

note: as most everyone know, the preceding and additional brand name, SAM ADAMS, is also registered separately, as are numerous otherSAM ADAMS formative marks, including the following stylized label:

C. Comments on the Trademark Perspective of these Beer Companies and their Brands

The first noticeable and common trait that each of these brands share is that they are protected both in standard character format (or as previously known, in block letter format) and in composite format, e.g., with a design or logo. This has obvious ramifications in purely trademark enforcement parlance, not to mention for the purposes of marketing.

Additionally, it is not a coincidence that each of these brands are protected by trademark registrations on the Principal Register with the U.S. Patent and Trademark Office. The Registrations provide a number of advantages in the U.S., including but not limited to, exclusiveness to the trademark within the U.S., presumptive validity, and after 5 years of use, the opportunity to seek "Incontestable" status via the Sec. 15 Affidavit.

Finally, we will leave it to conspiracy theorists to discuss the import, if any, with respect to the beer brand selections of the parties to this first ever Presidential Beer Summit, aka "Beer Mediation".

Postscript: Rumor has it a Beer Pong Summit is to be held in Helsinki, Finland.

Posted by William Maguire at 11:20 AM

A delightful and very original look at a historic event.